Let’s talk about three different categories of citizen science studies, that are described in literature and to whom the INSIGNIA-EU can be allocated (Bonney et al., 2009, see also Table 1).

Contributory projects: Typically, scientists design the study and the public is primarily involved by collecting data.

Collaborative projects: Scientists generally design the study, the public is involved by not only collecting the data, but also takes part in evaluating the study-setup, help analyzing data or is part of the dissemination process.

Co-created projects: Scientists work together with the public to design a study and at least a part of the volunteers is involved in all steps of the study process. 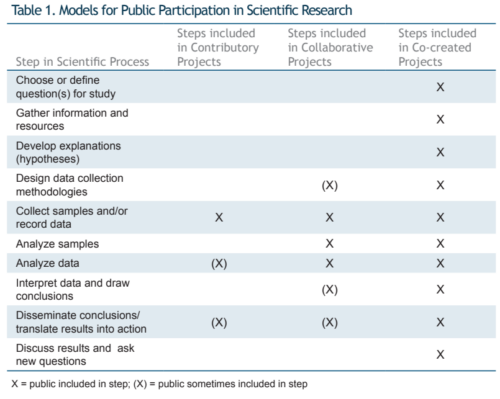 The INSIGNIA-EU project was designed by scientists and is influenced by the results and experiences of the preceding project INSIGNIA. INSIGNIA-EU study year 1 is the pilot phase and outcomes decide the setup for the full study in year 2.

In September or October, we will launch an online questionnaire for all beekeepers of year one. By answering the survey, we gain valuable insights in the personal opinions, experiences and assessments of the participants. Those will also influence the study-setup of year 2. Resulting in another pillar: the citizen scientists.

Through close contact of the national coordinators with the volunteers in the EU countries, we also know, that it is important for them to interpret their personal data and the corresponding consequences on their own. Some citizen science beekeepers also want to discuss their data with other professionals in their beekeeping clubs or even take a step further by informing policy makers or media. This is a so far overseen role in the beekeeping citizen science, even though it is an important role in the dissemination process.

INSIGNIA-EU therefore falls into two categories: a mixture of a contributory and a collaborative research project.