Our new publication gives an overview of the INSIGNIA project and its citizen science approach, which was also presented during the 2020 Austrian Citizen Science Conference. 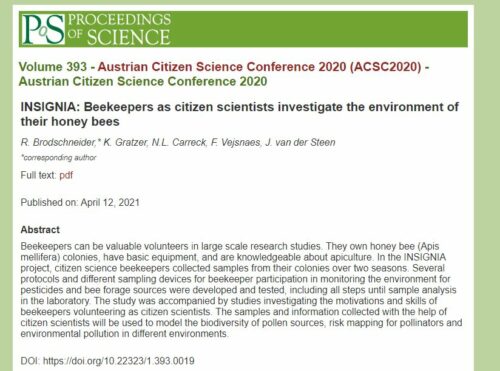 The article is freely accessible through:

Citizen science is becoming more and more popular these days, although no universal definition of the term exists. The most important aspects include the recruitment and training (or instruction) of volunteers – so-called citizen scientists. Even though citizen science has a long tradition in entomology and especially in the research on honey bees and bumblebees, the term has only been used for a relatively short time.

Researchers from the University of Graz for the first time ever investigated what motivates beekeepers to voluntary participate in a citizen science study like INSIGNIA. This specific group of citizen scientists was also asked what expectations they had from participating, which study aspects were easy or difficult for them and whether they saw added value from their participation.

The project can roughly be divided into two large parts. The first one served as a pilot study and was conducted from May to September 2019. A total of 16 beekeepers from four European countries (Austria, Denmark, UK and Greece), each with three bee colonies, took part. The aim was to identify the best suitable of four possible non-invasive sampling techniques. Part two of the project took place from May to September in 2020 and was based on the experiences of the previous year. A total of 82 volunteers from 10 European countries (the four mentioned, plus Belgium, Norway, Italy, Latvia, France, Ireland) took part and examined the environment –  each one with two of their colonies.

The beekeepers’ tasks included taking samples from two bee colonies every two weeks, as well as regular online documentation of the samplings, reporting the flowering plants in vicinity of the test apiaries, storage and transport of the samples, as well as answering a voluntary survey at the end of the 2020 season.

What have we learned about the citizen scientists?

END_OF_DOCUMENT_TOKEN_TO_BE_REPLACED

Austrian results of last year’s INSIGNIA samplings were made public in the beekeeping journal “Bienen aktuell”.
In 2019, 5 citizen scientists with 3 hives each participated.
We found that APIStrips together with beebread are the most promising matrices for detecting pesticides in beehives.
Further, we’ve chosen APIStrips for 2020, as they turned out to be more user-friendly.
For metarbarcoding, pollen sampling was the most suitable method.
The pollen analysis revealed 61 plant families with Fabaceae, Rosaceae, Plantaginaceae, Ranunculaceae and Asteraceae showing the highest occurence, respectively.
A total of 84 different substances were found in Austrian samples with an average of 2.4 in APIStrip samples, 2.9 in beebread, 1.7 in pollen and 1.4 substances in Beehold tubes.
Let’s see what 2020 samples from 9 beekeepers with 2 hives each will reveal.

All INSIGNIA  samples are analysed for pesticides residues and pollen diversity.

Last year, it was only possible to assign latter to the taxonomic family level, as the reference DNA database was not reliable enough to draw conclusions on botanical genus or species level. To complete the database, the colleagues from the Instituto Politécnico de Bragança in Portugal asked us to collect fresh plants, known to be important for bees.

No sooner said than done! The University of Graz sampled more than 60 plant species, herbarized them and will send it to Alice Pinto and her team in Portugal this week for ITS 2 metabarcoding. The figure below shows Papaver rhoeas, Cotoneaster horizontalis, Allium schoenoprasum, Tilia cordata, Rosa multiflora, Trifolium pratense, Sambucus nigra, Aruncus dioicus and Robinia pseudoacacia. All important melliferious plants for bees.

Hopefully, this enables the assignment of pollen to lower taxonomic levels in year two of INSIGNIA.

To estimate the colony strength, citizen scientists count the occupied beelanes in each hive for every sampling round.

END_OF_DOCUMENT_TOKEN_TO_BE_REPLACED

Today, the Austrian beekeepers, the national coordinators and the study coordinator met virtually to get to know each other and to see how everybody looks like. Jozef van der Steen gave a short presentation to explain the main objectives of INSIGNIA and to present last year’s pesticides and pollen results.

Austrian citizen scientists were very interested and some open questions could be answered by the NatCos Robert Brodschneider and Kristina Gratzer as well as by Jozef van der Steen, who by the way. speaks extraordinary good German.

Today, also the first sampling period started. Within the next four days the APIStrips will be exchanged and pollen will be sampled in nine European countries simultaneously.

The participating citizen scientists in Austria were very curious about their results from INSIGNIA year 1. As we were curious too, we attempted to provide the results of the metabarcoding and pesticides analyses as quick as possible to them – right after receiving the raw data from the labs and after submitting them to the EU. Further, it was also important to us, to ensure anonymity for the participants. Therefore, each citizen scientist only got his/her individual results.

We decided to not only send out the raw data files, as they are rather difficult to interpret for non-scientists. Instead we performed individual and basic data analysis for all of the 5 participants of year 1 and we arranged them in an excel file with several tables.

The main page (see figure below) explains some basics of how to handle the document and links to all of the result-tables.

The study start for INSIGNIA 2020 is one month away, but we already shipped the tool boxes to the nine Austrian citizen scientists. The tool boxes include the majority of the materials needed for the INSIGNIA 2020 study. The materials are sufficient for 2 bee hives, 1 installation round (=study start) and 10 sampling rounds. The pictures below show the content.

END_OF_DOCUMENT_TOKEN_TO_BE_REPLACED

Accompanying the scheme for the study set up, we also worked on an illustration for the detailed sampling scheme.  The scheme will also be translated and send to the citizen scientists. Within the scheme, one sampling period of each sampling method is illustrated and the crucial steps are shown. Additionally, the phenology list with 30 plants identified to be very important bee plants across Europe and the sampling dates are shown.