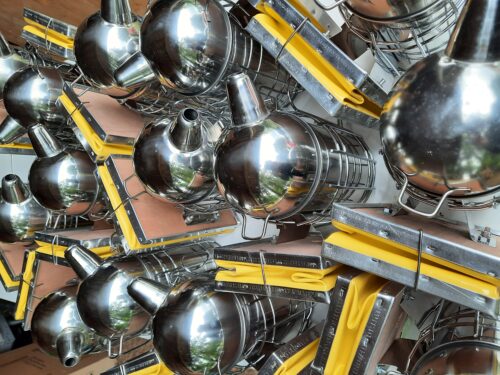 The smoker is the so to say “hidden secret of beekeeping”. We all know it is used a lot. We all use it. Even in Denmark we calculated about 14 different types of fuel used in the smokers. You could say that each beekeeper has their own special recipe for how to make the smoker work the best.

How do those smokers effect the colony? Do they influence the result of the APIStrips we use in the colonies during the INSIGNIA project?

There is a nice side project within INSIGNIA-EU where we in Denmark and Greece have collected, until now, 14 different types of fuel that we positively know are commonly used within beekeeping.

We tried to copy the volume of a 10 frame Langstroth and placed inside it an APIStrip. We invested in a new smoker for each type of fuel, so that we did not get any kind of contamination. Each smoker was marked with the type of fuel used, so that we can repeat the test later on if needed. Then, we lighted the fuel with a fire blower – did not want to use some other to lighten the smoker due to contamination. When lighted, we did pumpe the smoker heavy for 1 min, to get the temperature up. After 1 min, we pumped 20 times into the fake bee-box, sealed it and left it for 10 min with the APIStrip inside. The process was repeated with each one of the smoker fuels, with a different APIStrip in each case. Afterwards, the APIStrips were sent to the UAL laboratory and analyzed in search for PAHS (Polycyclic Aromatic Hydrocarbons). PAHs are environmental pollutants associated with the incomplete combustion of certain materials, and they can accumulate in the beehives as a consequence of the smoker use.

The test in Denmark has already finished. The results are really exciting: What will we find? Do we need to re-think the use of smokers within beekeeping ? Is the smoker the hidden polluter in the colonies? Is the use of smoke really something we can neglect ? Can it be traced in the honey? In case of cross contaminations with target compounds of the air pollution, the smoker should be banned from the INSIGNIA colonies and replaced with alternatives that do not have this possible disadvantage.

We are waiting for the final laboratory results and possible further testing for putting light on this in the future. AND…. A quest for nonpolluting alternatives of which lactic acid 5% in water or oxalic acid in < 3% concentrations looks like a serious candidate.

We will keep you informed, and you know, all interesting new INSIGNIA findings will be announced in the newsletters, blog, journals and scientific papers, depending on its practical and scientific relevance.