After samples’ arrival, they are all coded and then analysed or stored in the freezer till the day of analysis. For their preparation, extraction and clean-up steps are taking place, to separate the analytes from interfering compounds and obtain the optimum results. For the quantification of the pesticide residues analysed, both liquid and gas chromatography combined with tandem mass spectrometry is used. The last stage of this procedure is the data analysis and the evaluation of the results.

Lab material and equipment used by the lab staff (us), are presented in the following pictures. In particular, in the picture on the left, 50mL falcons containing salts for the clean-up step of the samples and 15mL falcons containing samples after the clean-up step are shown in the back and front part of the picture, respectively. Vials to be filled and vials ready for injection in LC-MS/MS and GC-MS/MS are also presented in the following pictures.

As all living organisms, all plants have DNA, and all plant DNA has an ITS2 (internal transcribed spacer) fragment. This ITS2 fragment is a specific part of the DNA strand and is unique for a plant family/ genus/ species. Of every pollen grain in the homogenised subsamples collected from a pollen trap, beebread and Beehold tube, the Insignia pollen matrices, the ITS2 fragment is isolated and multiplicated to millions of copies by an in vitro reaction called PCR.

In the isolation- and multiplication process an Index molecule is coupled to each ITS2 fragment. This Index is unique for a sample. For example, all pollen collected in a trap in front of hive 1 on a particular sampling date has the same Index and of hive 2, another Index. After coupling the Index, the order of DNA bases (G: guanine, T: thymine, A: adenine and C: cytosine) of each ITS2 DNA fragment is determined by using a technology commonly known as next-generation sequencing (NGS). The process of using a short fragment of a specific gene (in this case ITS2) to identify organisms (in this case plants from pollen) is known as “DNA barcoding”. Because a pollen sample collected in a trap combines pollens originating from many different plant species, then identification by DNA barcoding is called “DNA metabarcoding”. This DNA bases order or barcode is unique for a plant family/genus/species.

To determine the relative abundances of different pollen sources in mixed pollen pellets collected by bees, the number of sequence reads is recorded in the next generation sequencing (NGS) process. Each “read” is a specific sequence of DNA bases of ITS2 DNA fragment obtained in the multiplication process, and the more a specific pollen source (e.g. Brassica napus) is present in the mixed-pollen sample, the more reads of the ITS2 fragment of the specific source will be produced. Consequently, the more reads this specific ITS2 fragments have, the higher the relative abundance.

This process from DNA isolation from the pollen until the sequencing of the DNA bases is time consuming compared to microscopic morphological determination. However, several hundreds of samples (= many thousands of ITS2’s) are analysed simultaneously in one sequence run, which makes it time-saving. The number of samples that can be sequenced simultaneously depends on the number of unique Indices available.

The photo of the screen with the coloured lines shows the result of sequencing each colour represents a DNA base. The second photo shows the microcentrifuge tubes with the DNA extracts. The third photo shows the ITS2 fragment multiplicated by PCR. The fourth photo is the IPB team working in Insignia and me.

Among other EU countries, Austria will also participate in next year’s INSIGNIA ring-testing. Therefore, we are looking for suitable citizen scientists to accompany us through this process. For this purpose, and to introduce the INSIGNIA project to Austria’s beekeepers, we published an article in “Bienenaktuell”-Austria’s biggest beekeeping magazine. We presented our main project goals and the tested active and passive sampling matrices to the readers and draw attention on Austria’s role in the INSIGNIA project in 2019 and the upcoming year 2020. 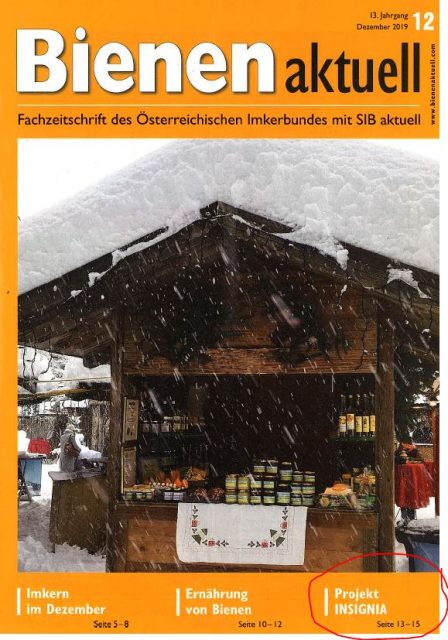 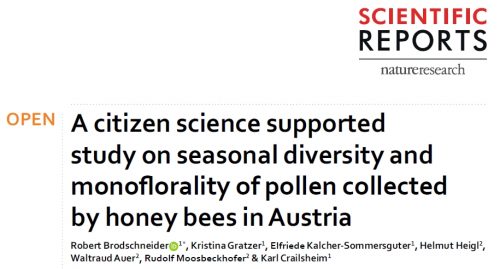 In Insignia we are “Monitoring pesticides and pollen diversity via honeybees” – that is the claim on the starting page of this website. But how can one do that, and what are the advantages to do that with citizen scientists? END_OF_DOCUMENT_TOKEN_TO_BE_REPLACED 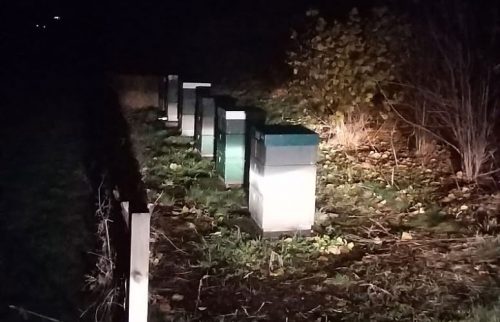 The colonies in Denmark have been treated for varroa mites, the main killer of honey bee colonies. We know we did treat well during the season with organic treatments. We finished feeding and the bees have slowly started to have what we call “loose” winter cluster. On sunny days with the sun on the bee boxes, the bees do fly out and we even see them collect pollen during those warmer days. The colonies look very fine and strong and we expect them to come into the new season well. END_OF_DOCUMENT_TOKEN_TO_BE_REPLACED

Every 2 years the Bee Protection group of the International Commission for Plant-Pollinator Relationships (ICPPR) organises a congress about the hazard of pesticides to bees. Bee researchers from academia, contract labs, industry, governmental institutions, EFSA, organisations involved in bee protection and conservation and student meet there to present and discuss new developments and draft methods and outcomes in assessing the hazard of pesticides to bees both for first to higher tier studies, current hazard assessments are evaluated and new guidelines are presented. This Bee Protection group is both stakeholders of the Insignia pilot study and a target international body to present Insignia. There was a lot of interest in our study, particularly for the non-biological passive samplers. It took some effort to explain the role of the honeybee colony in this study, being not the major subject but the data collecting tool. Contact is made with similar monitoring studies, working groups and EFSA for cooperation and data exchange. Both cooperation and data exchanges are subject currently discussed with the EC-DG SANTE and the consortium. It has shown the need for data of pesticide residues in the environment and the role of the honeybee-colony-tool fulfill in this hot topic.

Do we really work for the sake of SCIENCE? Are we science-holics? It is really  important to have an answer to pacify my mind! All Sunday morning spent in the lab preparing the samples, in order to have them ready for shipping Monday morning to analytical laboratories. And this is not the only thing, crazy scientists do! We also travel very far (900 km in one day) during the weekend, because there is no other time available, to meet the Citizen Scientists and collect the samples in dry ice (!), transferring the samples next day to the lab (Sunday of course)! And, hello !, the next morning (Monday of course) the financial officer tells you that you are not eligible for reimbursement of your travel expenses because it was a WEEKEND! If I’m not in love with science, what then??? 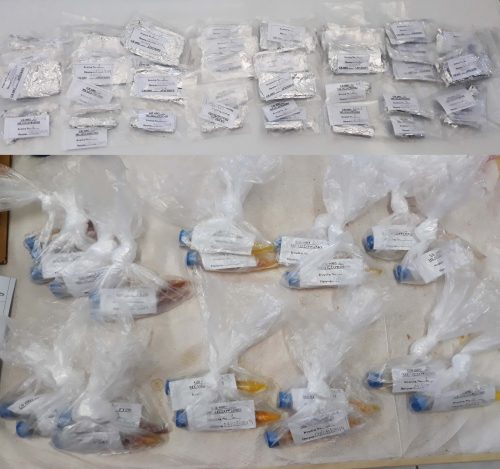 But the story has another dimension! The citizen scientist’s products! The samples! I want to remember only the ones really making a great effort to collect as many samples as possible, write the correct information on the labels, pack them properly and all together in one bag per DATE of COLLECTION! Like in the pictures attached! With such a perfect collaboration, yes, I can spent my weekends travelling and in the lab! Thank you NA, GS and PA for all the good work!

Hope to work with you next year as well! Now lets wait to see the analysis results to understand what is happening out there!

From the other side, monitoring the development of the colony and the bees behaviour is a way also to see the effects of the pesticides. Remote monitoring and precision apiculture is very much in ‘fashion’ these days. Temperature, humidity and colony weight are the most common features in a remote censoring, vibrations and sounds are getting in to the game as well, more and more.

Here is a remote monitoring system for temperature, humidity and sounds, could they tell us something about bees’ reaction to the pesticides entering the colony?

Still to be determined! 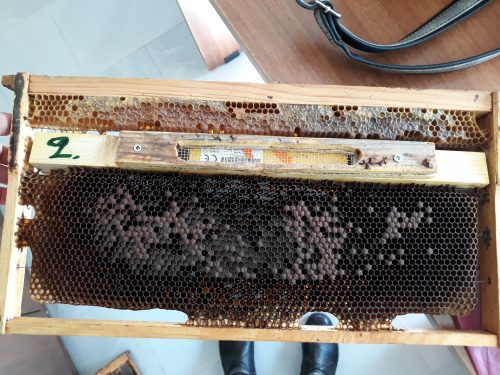