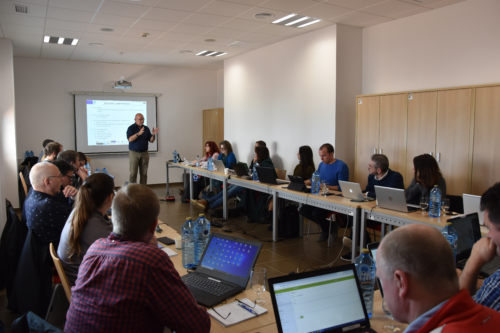 At the University of Almeria, Amadeo Fernandez-Alba and his team hosted 24 scientists from 10 countries for the plenary Insignia meeting on 14th and 15th January 2020. In a great ambiance, the results of the 2019 study were presented, discussed and comprised into the 2020 protocol, to be tested in 9 countries in 81 apiaries. The results presented clearly showed a difference between the four (4) pesticide residue matrices, the two biological matrices: trapped pollen, beebread, and the two non-biological non-invasive passive sampling matrices: Beehold tube and the in-hive APIStrip. The latter proved to have the best binding capacities for the number of pesticides. Trapped pollen proved to be a very poor matrix for this purpose. Beebread and the Beehold tube functioned in between. For pollen diversity, three matrices were tested: trapped pollen, beebread, and the Beehold tube. Comparison between classic microscope palynology and ITS2 pollen metabarcoding revealed that ITS2 pollen metabarcoding results are comparable outcomes on family level. For pollen diversity, the three (3) matrices gave similar results. Based on the 2019 results it was decided to apply in the 2020 study the best pesticide residue matrix APIStrip and the most practical pollen matrix: trapped pollen for ITS2 metabarcoding. Insignia is about protocol development for citizen science study. The interaction between scientist and apiculturist has been studied in a sociological study. Non surprisingly it can be concluded that citizen scientist involvement is based on personal interests like participating in a scientific study or interest in the environment primarily on mutual respect between the scientist and beekeeper and mutual concern for the well-being of the honeybee.

All the aspects, from the interaction between scientist and beekeeper and instruction workshops to practical issues as best exposure location, matrix storage, and transport were point by point discussed and agreed. This will result in an updated instruction/ picture manual for all participating beekeepers.