The best way to learn all the ins and outs of Insignia sampling is simply doing it. Flemming and Ole were so kind as to invite me and Valters to assist in the 5th sampling. Due to mine and Valters agenda, the 5th sampling in Denmark was brought forward to Thursday and Friday 4 and 5 July. It was an interesting learning experience for myself and Valters to prepare package and coding,  to do the pollen collection,  taking out and inserting respectively the old and new APIStrips and Beehold tubes, collecting beebread and emptying the pollen trap, to have an indication of the time and energy spent on the labour before and after the field work. I learned/ was confirmed that coding/ sample preparation requires a consequent and accurate effort, beebread picking takes time in two ways, looking for the best frame and the picking itself, the facility of the APIStrip and Beehold tube change and the every time wonderful view of the diversity of pollen in the trap.  All samples are stored in the freezer.

Just a reminder for sending the samples latest half July as described in the picture manual except alcohol on trapped pollen for PCR (and not for pesticide analyses).

Pollen identification
– trapped pollen for pollen identification are sent to Alice in alcohol 96%,
– Beehold tubes and beebread straws are sent, wrapped together with frozen icepacks in an insulating package of e.g. plastic foil with air bubbles or styrofoam box.

Pesticide residues
– APIStrips, Beehold tubes, trapped pollen and bee bread  are sent to the labs wrapped together with frozen icepacks from the freezer in an insulating package of e.g. plastic foil with air bubbles or styrofoam box.
– The division, where to send the samples for pesticide residue analyses will be announced in time. 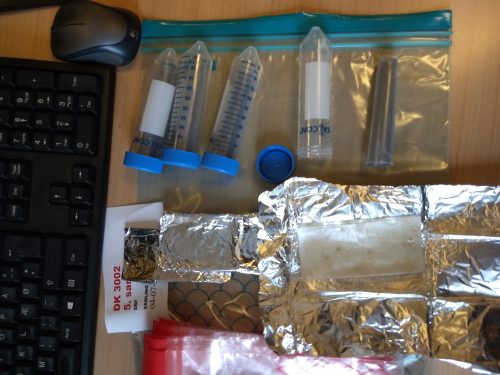