As all living organisms, all plants have DNA, and all plant DNA has an ITS2 (internal transcribed spacer) fragment. This ITS2 fragment is a specific part of the DNA strand and is unique for a plant family/ genus/ species. Of every pollen grain in the homogenised subsamples collected from a pollen trap, beebread and Beehold tube, the Insignia pollen matrices, the ITS2 fragment is isolated and multiplicated to millions of copies by an in vitro reaction called PCR.

In the isolation- and multiplication process an Index molecule is coupled to each ITS2 fragment. This Index is unique for a sample. For example, all pollen collected in a trap in front of hive 1 on a particular sampling date has the same Index and of hive 2, another Index. After coupling the Index, the order of DNA bases (G: guanine, T: thymine, A: adenine and C: cytosine) of each ITS2 DNA fragment is determined by using a technology commonly known as next-generation sequencing (NGS). The process of using a short fragment of a specific gene (in this case ITS2) to identify organisms (in this case plants from pollen) is known as “DNA barcoding”. Because a pollen sample collected in a trap combines pollens originating from many different plant species, then identification by DNA barcoding is called “DNA metabarcoding”. This DNA bases order or barcode is unique for a plant family/genus/species.

To determine the relative abundances of different pollen sources in mixed pollen pellets collected by bees, the number of sequence reads is recorded in the next generation sequencing (NGS) process. Each “read” is a specific sequence of DNA bases of ITS2 DNA fragment obtained in the multiplication process, and the more a specific pollen source (e.g. Brassica napus) is present in the mixed-pollen sample, the more reads of the ITS2 fragment of the specific source will be produced. Consequently, the more reads this specific ITS2 fragments have, the higher the relative abundance.

This process from DNA isolation from the pollen until the sequencing of the DNA bases is time consuming compared to microscopic morphological determination. However, several hundreds of samples (= many thousands of ITS2’s) are analysed simultaneously in one sequence run, which makes it time-saving. The number of samples that can be sequenced simultaneously depends on the number of unique Indices available.

The photo of the screen with the coloured lines shows the result of sequencing each colour represents a DNA base. The second photo shows the microcentrifuge tubes with the DNA extracts. The third photo shows the ITS2 fragment multiplicated by PCR. The fourth photo is the IPB team working in Insignia and me. 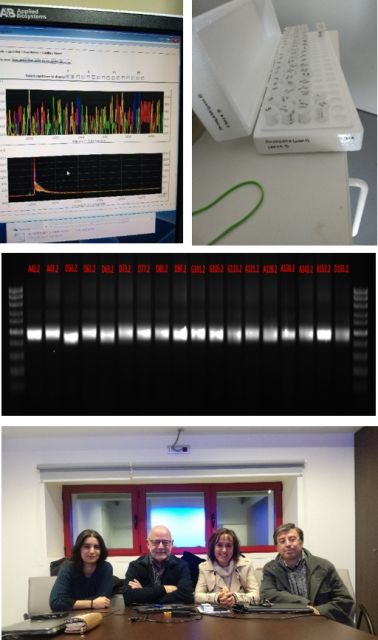