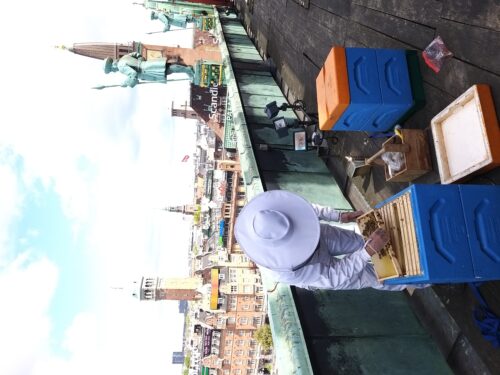 Microplastics are spread over long distances by the wind and deposited via rain or downwind movement in colder areas. Studies have shown that in remote areas in the USA, about 100 microplastic particles per square metre per day drop on the soil, and European studies recorded up to some hundred particles deposited per square metre. This seems a lot, but taking into account that one square metre is 1000 billion (1×1012) square micrometres you can imagine that monitoring is a hard job to do. Therefore science has been looking for methods to monitor this.

The honey bee colony is one option. A group of Spanish researchers from the Universities of Madrid and Almeria studied the prevalence of microplastics in Danish honey bee colonies. The three authors and participants of the INSIGNIA group were involved in this study. It was found that microplastics were found in every colony sampled, whether the apiary was in an urban or in a countryside area. Per 100 bees, on average 1.3 microplastic particles were detected, mostly polyethylene fragments and synthetic fibres. The polyethylene fragments come from packing materials, plastic bags, bottles and the fibres from clothing, all brought into the environment by man. The crux of applying the honey bee colony is similar for every purpose that bee-monitoring is used for; many thousands of bees forage on many thousands of flowers per day and bring, besides food, all kind of particles present in the flowers like microplastic fragments and fibres back into the hive.

Let us make a simple calculation on microplastics, to indicate the sampling capacity of a honey bee colony. In general a 20,000 bee colony has about 5,000 forager bees that go out 10 times a day to visit on average 10 flowers. If each flower has a surface of 3 square centimetres, the total area is 150 square metres with 150 x 100 = 15,000 microplastic particles. A large proportion of particles that end up on a bee’s hair during foraging are removed during flight, are combed into the corbiculae and in the hive are removed by auto- and allogrooming. To give an indication of the removal process, studies with in-hive pollen exchange showed that the smaller the particle is, the harder it is for bees to remove. A study with 25 micrometre sized charcoal particles  to simulate pollen grains indicated that about 2% remain on the bee’s body after the  combing and grooming process. This remainder is exchanged in the hive among all bees by physical contact. It is obvious that the removal of microplastics is not the same as charcoal or pollen, but it is reasonable to assume that it is of the same order.  If a forager cohort collects 15,000 microplastic fragments and fibres, about 300 will be exchanged in the colony. This is 0.015 particle per bee and 1.5 particle on 100 bees. This is in line with what was found. This shows the power of the large numbers that the honey bee colony can offer with its large forager cohorts and the accumulation of what is collected in a central place, the hive.

The article can be downloaded with the following link till about end-March. https://authors.elsevier.com/c/1cOw-B8ccoRhW. After that it must be paid for.