Do bee colonies make pollen stores? Yes, they do! 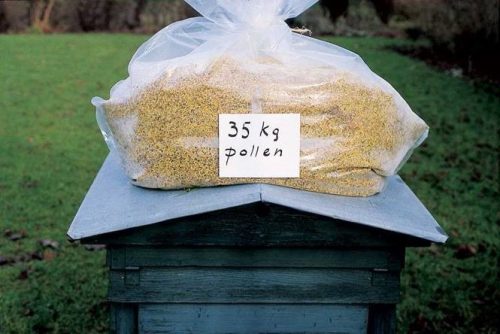 One of our old very valued scientists in Denmark Orla Svendsen long time ago made the nice picture with a big pollen bag on the roof of a bee colony to illustrate the consumption/need of pollen as protein supply for a production honeybee colony. Literature claim different values, but he claimed a colony needs around 35 kg a year. Sjef van der Steen (personal comments) did some very nice calculations on this subject that does support this saying 30-35 kg. This is a lot.In the Danish pollen collection project, where we look on the potential for pollen collection on Danish bee colonies, we get from zero (bad weather) to around a few hundred grams a day, having colonies with up to 800-1000 grams of pollen on good harvest days. Note, we are using a pollentrap that does not harvest all pollen, but let the bees get their part as well. So, pollen collection has a big potential and there are enormous resources in nature.

We know that the bees relative fast does use the new inborn pollen. But we also know that they make stores and some varieties do collect more pollen then other types.

Some varieties of the Danish Buckfast bees have the rumour that they normally do fill the bottom box, the one with the old frames, with pollen during the season. On the pictures you can see a Danish colony end June this summer, more or less filed up the bottom box with pollen.

In our pollen collection group, we try to breed for bees having a high pollen production.

Having all this in mind, a side effect of our project is that we have big variety in the pollen collection during the season, but also between apiaries and between colonies as well. And it would make sense to make some pollencollection test, especially at the end of the season to get an indication of the pollen supply of the local area. Simply because the pollen supply can be to low to support the production of strong and long lived winterbees. One more explanation for potential winterlosses.