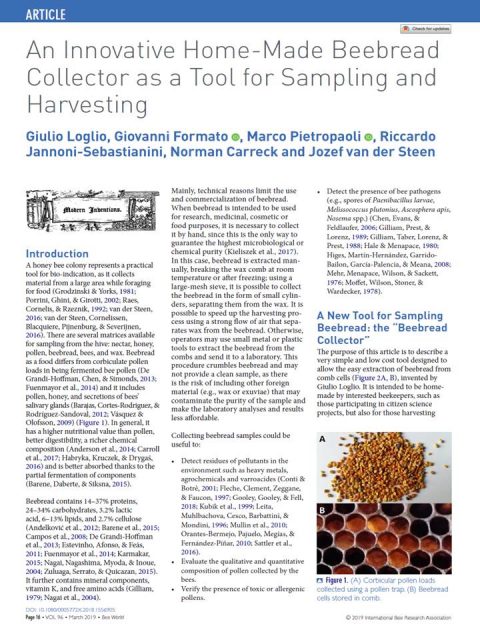 The INSIGNIA project will involve the beekeeper citizen scientists collecting pollen samples using pollen traps, but the scientists have concerns about possible degradation of chemical residues in the pollen during the sampling period, storage and transport. For this reason, we will also be testing two alternative methods of collecting pollen, an innovative passive device, of which more later, and the collection of beebread from the colonies. Beebread is pollen collected by the bees as pollen pellets, and then packed into broodcombs for the colony to use. In the packing process enzymes are introduced by the bees so that its composition changes slightly, thus improving its storage properties. Previous methods of sampling beebread mainly involve damaging brood combs, but in the latest issue of Bee World, Giulio Loglio from Italy with colleagues from Istituto Zooprofilattico Sperimentale del Lazio e della Toscana “M. Aleandri” and other INSIGNIA colleagues describe a low cost beebread collector which can collect a sample without damaging the combs. This will be trialled in Year 1 of the INSIGNIA Project.
The article can be found here: https://www.tandfonline.com/doi/full/10.1080/0005772X.2018.1556905