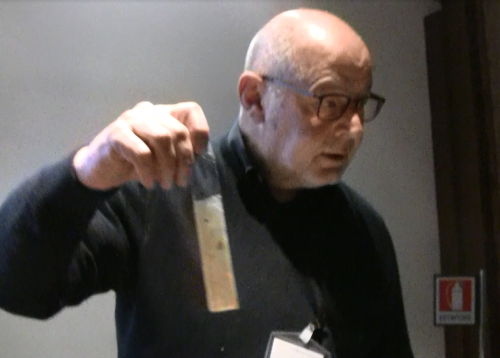 This is my personal impression, not describing the presentations, talks and posters but my interpretation. The note will therefore be biased towards my personal interests and work-fields. For detailed information, you can find the abstracts in the Apimondia symposium abstract book of this event. Many veterinarians attended the meeting, showing the interest of veterinarians in bee health and the environmental impact of bee well being and the direction of Apimondia in this. The Federation of Veterinarians of Europe presented a veterinarian approach of bee disease. To outline the position of honeybees in veterinary, honeybees are considered to be MUMS (Minor User = Minor Species). The FAO was present its SPGs (Sustainable development Goals) in which beekeeping plays an important role in banning poverty.I was invited by the INSIGNIA member on the board of this symposium, Giovanni Formato, to present a talk introducing the INSIGNIA project. To start with the latter, the project was well received. The audience was interested in our innovative sampling approach. The discussion focused on the study-set up, and my view was that it is not that hard to collect data, but that is hard to analyze and interpret these data scientifically if they are not collected in a similar way and with sufficient repetition to ensure a reliable power of statistical analysis. This is not a monitoring project as such but a study to arrive at an innovative apiculturist citizen science study set up for reliable uniform data collection. In summary, my main message was that preliminary studies will focus on solid sampling and sample handling, in order to end up with a good protocol and study set-up.
The Apimondia symposium revealed three very interesting areas of tension:

1) Between large scale genetic improvement for pathogen resistance versus local breeding. M. Mortarino of the University of Milano, Italy, listed the knowledge gaps. One of these gaps mentioned was the genome, focused on the genetic traits for varroa resistance. It was proposed as an interesting field of genetics to work here and improve this trait by large scale selection and genome improvement; a superbee combining all man needs from the bee: no pathogens or parasites and lots of honey. On the other hand, J. Pettis (USA), President of the Apimondia Scientific Commission on Bee Health, emphasized the importance of the locally adapted bee as the key message of Apimondia with much beekeepers’ awareness and local selection.

2) The very focussed search for pathogens and control methods versus accepting the fact that honeybees are living organisms that do have, like all living organisms, pathogens, and parasites and that it is up to the organism to remain as strong as possible to overcome them. In the case of beekeeping, where we took over this responsibility by making honeybees domestic animals, it is good practice to take care of good and continuous nutrition and housing. Varroa destructor and Aethina tumida, as some of the most important invasive pathogens entering the European Union in the past 100 years, need special attention.

3) The control of the Small hive beetle (SHB) is also a field of conflicting insights. Having entered Italy in 2014 in the Calabria region, the Italian authorities managed to restrict it to southern Italy and outbreaks outside this area were eradicated successfully. For the authorities there is for now, a stimulus to continue in this way. On the other hand, it can be argued that eradication failed and that attempts to achieve this now should be stopped and it should be accepted that SHB is endemic in the EU and the focus should be switched from eradication to control. The latter is not as simple as it sounds. Concerning knowledge of the biology of SHB, despite many studies and PhD theses, it is still in the “Kindergarten” stage (quote P. Neumann). For example, we still have no idea how far a beetle can fly, and only recently it was observed that the beetles consume pollen and nectar directly in the flower, independently of storages in honeybee colonies, bumble bee nests and in the pollen and nectar mixtures stores of solitary bees such as Megachile rotundata (leafcutter bee).

This “Kindergarten” statement was often quoted in relation to knowledge gaps, amongst others Varroa destructor resistance and Aethina tumida biology and beekeeping management. Uncoordinated / unscientific / incomparable data collection does not help to solve this problem. As in bee breeding and selection here also is the large scale versus local approach. F. Vejsnaes (Denmark) promoted the HiveLog system, a data collection system designed by the beekeeper for the beekeeper intended to evaluate his or her management. On the other hand the BEEXML system was promoted by J. Cazier and J. Wilkes of the Appalachian State University, USA. This is an open apiary management system, with blockchain security for data protection, where all data are collected centrally and evaluated with big data analysis. To me, this presentation was, as some others e.g. those about pollen substitutes and a thermal device for heat treatment, ordinary advertisements without an underlying scientifically proven base.