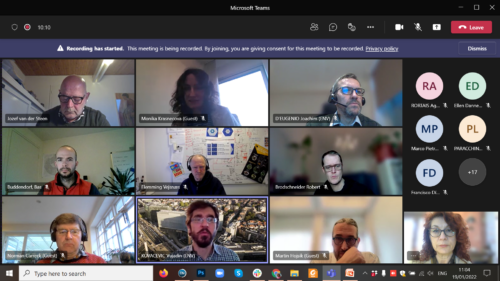 Presentations were made by members of the INSIGNIA-EU Consortium outlining the work programmes of the eight Work Packages which will be carried out during the 30 month €4M budget project. Particular emphasis was placed on the “pilot study” works to be carried out in Austria, Denmark and Greece in 2022, which will trial the new techniques needed to sample and analyse pollutants relevant to bees that were not studied during the original INSIGNIA Project. These will include: air pollutants including fine dust / particulate matter, with analysis for polycyclic aromatic hydrocarbons and volatile organic compounds; heavy metals; and microplastics. In 2023, a full sampling programme will take place in all 27 EU Member States. All of those present agreed that the meeting was a very useful and constructive start to the project, and will be followed up by further meetings to discuss technical details of the project.